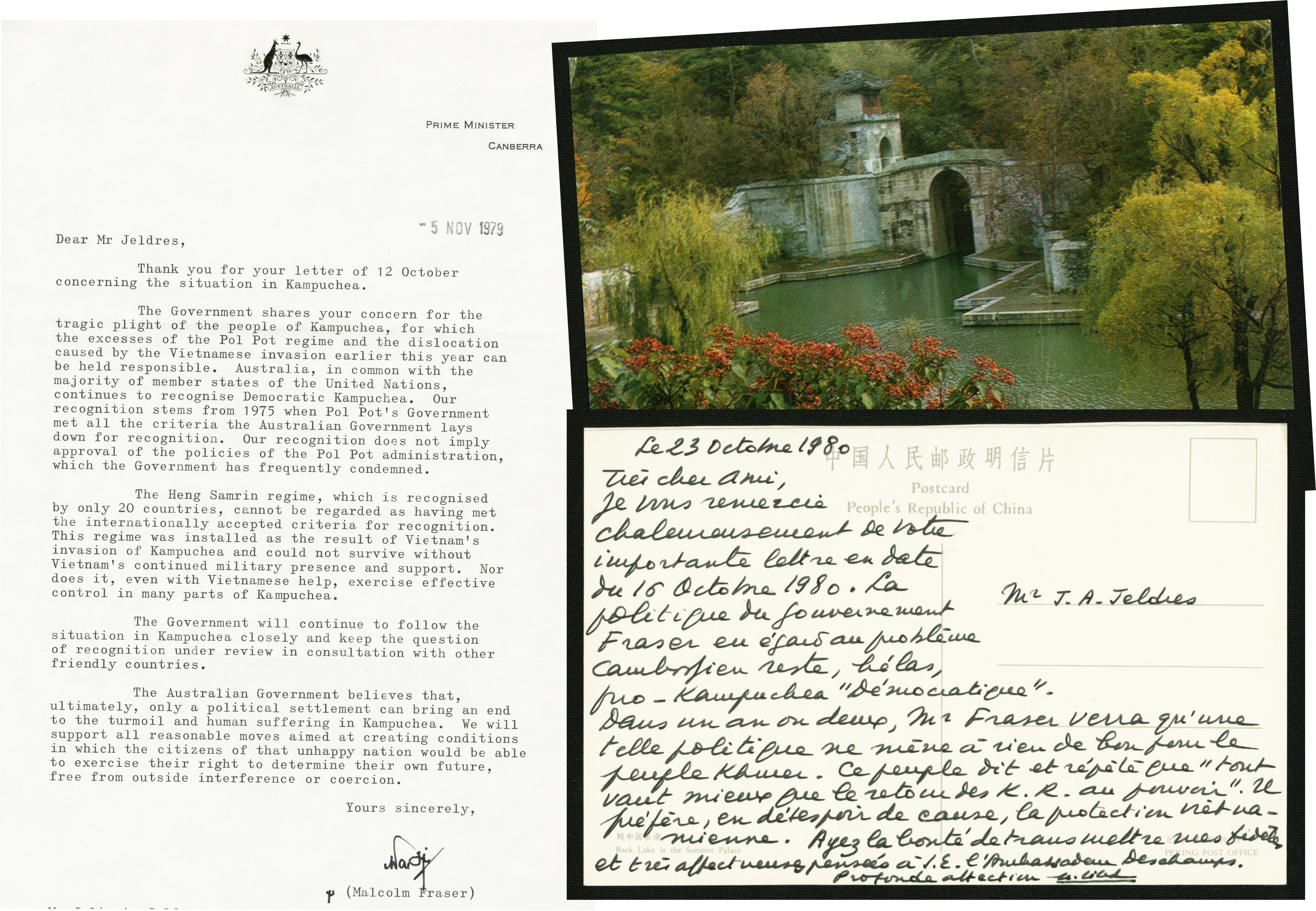 A series of letters exchanged between Ambassador Julio Jeldres and the late King Norodom Sihanouk of Cambodia, the Australian Prime Minister, Ministers, and Members of Parliament in the years between 1970 and 1981. In this series of correspondence Jeldres urged the de-recognition of the Pol Pot regime which Australia had recognised in 1975, long before Pol Pot was known as the powerful Secretary General of the Cambodian Communist Party, popularly known as the "Khmer Rouge" and when the regime was known as the Royal government of National Union of Cambodia (GRUNC) led by the late King Norodom Sihanouk. In early 1976, King Sihanouk resigned as Head of State of GRUNC and Khmer Rouge leader Khieu Samphan, took over as President of the State Presidium of what became known as "Democratic Kampuchea", with Pol Pot as Prime Minister as well as Secretary General of the CCP.

After the Vietnamese invasion of Cambodia in January 1979, the remnants of the Pol Pot regime relocated to the jungle areas bordering Thailand and began a guerrilla war against the Vietnamese. Originally supported by China, it soon received the support of ASEAN and some Western countries which opposed Vietnam's Communist regime and they in turn put pressure in countries such as Australia not to withdraw recognition from "Democratic Kampuchea" and to support its seat at the United Nations General Assembly. The late King opposed recognition of the Pol Pot regime and also called for the Cambodian seat at the United Nations to be left vacant until such a time when the Cambodian people had the opportunity to participate in a free and fair election.

In Australia, there was strong public opinion against the Pol Pot regime but the government of Prime Minister Malcolm Fraser felt that if it withdrew recognition from "Democratic Kampuchea" it may jeopardise its relations with China and ASEAN. The Australian government was divided about the issue with the Foreign Minister, Andrew Peacock, pushing for an early de-recognition of the regime and the Prime Minister opposing it.

In China, where he lived in exile, the late King found himself opposing the views of the Chinese government and at times his relationship with Chinese leaders was indeed on edge. On a number of opportunities, he was not allowed to send telegrams as it was his practice. Thus, he responded to telegrams and letters by sending Chinese postcards in which he still criticised the Pol Pot regime and those that supported it.

On 14 February 1981, Australia finally withdrew recognition from "Democratic Kampuchea", while continuing to support the ASEAN-sponsored resolutions at the United Nations General Assembly to occupy the Cambodian seat at the UN and related agencies.


The Julio Jeldres Cambodia Collection, held at the Sir Louis Matheson Library, comprises a series of folders and boxes of correspondence, declassified diplomatic reports and research papers between Ambassador Julio Jeldres and His Late Majesty King Norodom Sihanouk of Cambodia between 1970 and 2012.

The Library is working with Ambassador Jeldres to digitise  this archive.

Response from the Australian Prime Minister to Ambassador Jeldres' letter of 12 October. 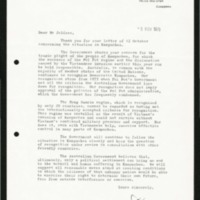 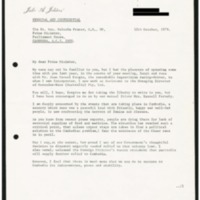 Response from the Australian Foreign Minister to the letter of Ambassador Jeldres, dated 4 September 1979, concerning the situation in Cambodia (Kampuchea) 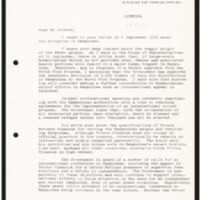 A letter from Australian Ambassador Jeldres to Senator Wheeldon, whom he had met early in the year in Canberra, concerning events in Cambodia 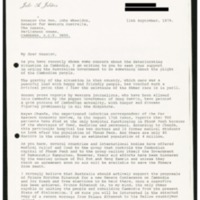 A letter from Australian Senator Wheeldon, who had met Ambassador Jeldres in Canberra early in the year to discuss Cambodia. 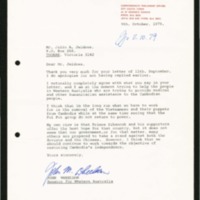 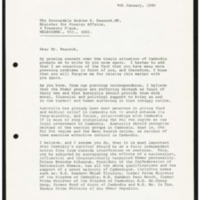 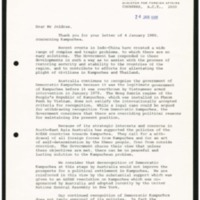 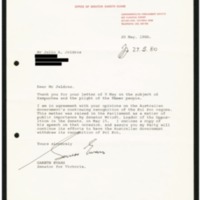 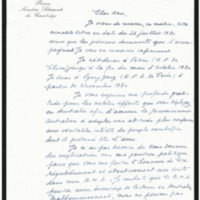 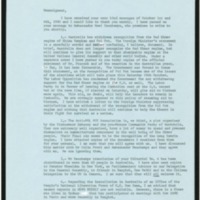 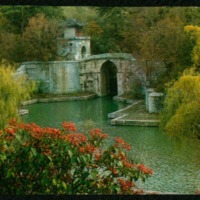 Postcard from Prince Norodom Sihanouk to Ambassador Jeldres commenting on the re-election of Australian Prime Minister Malcolm Fraser of Australia and hoping that he will stop recognition of the Pol Pot regime. 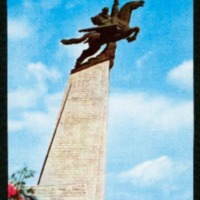 A letter from Ambassador Jeldres to Prince Sihanouk reporting on the arrival of a new letter from the Australian Foreign Minister and the support Australia continues to provide to the the Pol Pot regime. 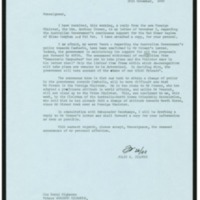 Response from Australian Minister for Foreign Affairs regarding Kampuchea policies 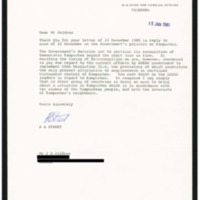 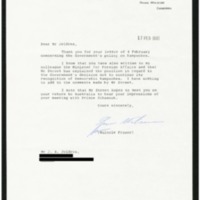 A letter from Ambassador Jeldres to the Australian Prime Minister raising concern that after Australia's de-recognized the Pol Pot regime in Cambodia, it stills support its seating at the UN. 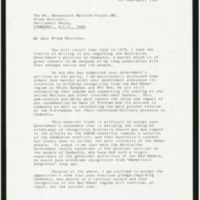 A letter from Ambassador Jeldres to several Australian parliamentarians concerning the fact that four months after the Australian government announced the de-recogniton of the Pol Pot regime, Australia is still supporting the sitting of the regime at the United Nations 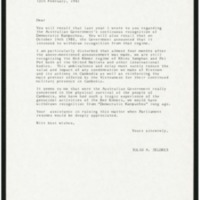 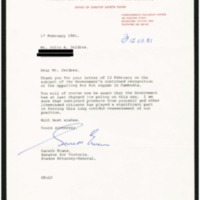 A brief letter from Prince Norodom Sihanouk (who was in Singapore) thanking Ambassador Jeldres for a teklegram of good wishes. 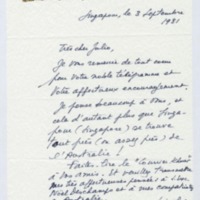 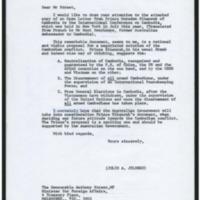 A letter to Julio Jeldres from the Private Secretary of the Minister for Foreign Affairs (Australia) advising that his letter has been received. 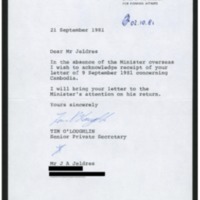 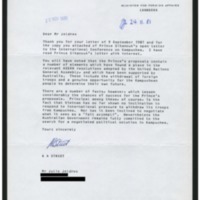